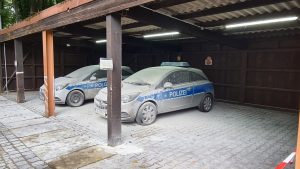 Some see an injustice in the institutions of the executive. Here, the officers hit a left-wing sit-in too hard in order to allow a right-wing march to pass, there they would act too gently against lateral thinkers, migrants would be deported to “unsafe” countries of origin, and if an officer’s trigger leads to death, he should be brought to court for his irregular actions, since he must have acted out of personal rather than professional motivation.

Cops all over the world have the function to detect the smallest rebellion against the system of capital, against the system of patriarchy, to press it into the logic of criminal law (i.e. to present it as non-political), to discredit it and to appropriate it. In the struggle for interpretive sovereignty, their goal is to control and crush this rebellion, with visible or subtle violence, depending on the balance of power and the form of government.
In this sense, the system of subjugating every element of our lives to the standard of norming and hierarchization according to property, body, religion, gender, origin, and attitude that prevails everywhere is manifested.
Their use cannot be judged in the categories of unjust or unjustified. The institutionalization of the police has never been about justice. The police are a system of domination and any narrative of humanity behind the uniform serves only to obscure social conditions.

We neither want police violence to be relativized because nothing else is to be expected from cops than racial profiling up to racist police killings. Nor do we believe that the handling of the right-wing series of attacks in Berlin Neukölln (1) by cops in cooperation with the public prosecutor’s office will produce more than an attempt to rehabilitate their own authorities.
On the other hand, constantly dealing with the complex surrounding the NSU should always be both a warning and a reality check for all of us: We cannot rely on the will to investigate of authorities who will make racist judgments and protect their public servants*.
Officers from patrol to intelligence stand as a bulwark between each and every one of us and the goal of our struggles: a life without oppression.

This attack on the object protection guard in Berlin’s Tiergarten/embassy district means for us solidarity, empowerment, revenge, the interruption of their operational capability and the demonstration of the fact that their structures can be hit from ambush, even without equality of arms, materially and symbolically. The target of our action was the vehicles in the fenced area, knowing that the cops are also in the area in the bungalow. To stop alerted cop support and secure ourselves, we scattered crow’s feet and locked one of their gates.

Precisely because no individual can succeed in keeping track of all that emanates daily from cops and secret services in the FRG alone, a list of chronicles and research pages follows, the contents of which were the sad and angry motivation for our action and should finally cast doubt on the extension of the 110.
No forgiveness, no forgetting!

Murdered by German police officers (see below for full chronicle):

Oury Jalloh
On January 7, 2005, Oury Jalloh was burned to death in the cell of the police station in Dessau. Even after 15 years, during which the Oury Jalloh Initiative has been working to clarify the situation and has established with several expert opinions that Oury Jalloh could not have set himself on fire, the cops and the courts still claim this today. All the facts speak against it. Most recently, the special advisors to the Saxony-Anhalt state parliament announced in August 2020 that they were sticking to the version of self-ignition.
Since the murder of Oury Jalloh in 2005, at least 97 other people affected by racism have died in custody or been killed by police.

Hussam Fadl
Hussam Fadl was shot in the back by Berlin cops in the courtyard of a refugee shelter on September 27, 2016. The cops’ versions that he had a knife in his hand and that they then shot him is just one of many unresolved allegations during the trial. The lack of clarification in court and during the investigation reinforces the suspicion that this is a case of deadly and racist police violence. Again, Hussam Fadl is made a perpetrator by the cops after his death.

Aman A.
Aman A. was shot and killed by cops in Stade on August 17, 2019. There is not to be a case against the policeman. The public prosecutor’s office has closed its investigation against him. The open questions raised by this death of a fugitive will never be answered on the part of the state.

Maria B.
On January 24, 2020, Maria B. was shot dead in Grünberger Straße in Berlin Friedrichshain. The cops had entered the apartment and also broke open the door behind which Maria B. had locked herself. They found Maria B. at the end of the room with a knife in her hand. From a distance of 6 meters, the policemen shot her in the chest. Maria B. died as a result of the attack. In this case, too, the investigation was discontinued by the public prosecutor’s office.

Ferhat Mayouf
On July 23, 2020, Ferhat Mayouf burned to death in the cell of the Moabit correctional facility in Berlin. The JVA, the cops and the judiciary announced the version of suicide and thus rejected any responsibility. However, research and reports from prisoners lead to a different picture. It was known that Ferhat Mayouf was mentally unstable and told of depression. Instead of taking these seriously, he was locked up 23 hours a day and kept in isolation. Broken ribs indicate possible mistreatment by guards. Prisoners reported that lockers stood outside the door and did nothing when the cell was already on fire and he called for help. Ferhat Mayouf’s death was not a sudden accident or a free decision to commit suicide.

Qosay K.
On March 5, 2021, Qosay K. was taken into police custody, collapsed there, and died a short time later in the hospital. The cops and paramedics involved were investigated for bodily harm, failure to render assistance in the course of their duties, and involuntary manslaughter. These investigations were discontinued a short time later by the Attorney General’s Office and the complaint against them was rejected. A review of this case is not being undertaken by the state and is now the responsibility of the “Alliance in Memory of Qosay.”

(1) Right-wing arson attacks in Berlin-Neukölln.
“According to earlier data, police attribute 72 cases to the series of right-wing extremist acts in Neukölln, including 23 arsons. Many of them were committed between late 2016 and mid-2017. After arson attacks in early 2018 on the cars of a local politician and a bookseller, police had searched apartments of right-wing extremists. The arsonists could not be convicted. The police assume a total of three suspects. In June, it became known that a police chief inspector was also being investigated, who is said to have had contact with one of the suspects via a former AfD chat group. The commissioner is said to have betrayed official secrets to this chat group” (taz).