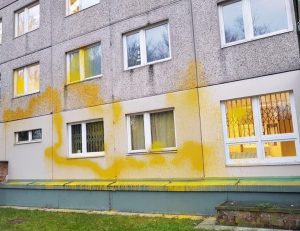 In the night on the 29th of November we have large-area painted the copstation at Treptower Park (responsible for youth-violence and building security). In solidarity with the evacuated Gare-squat in Exarchia – Athens and the therein arrested.

Solidary neighbourhoods everywhere are being attacked by the state, economic and civilian levels – but everywhere there are also structures that organize themselves for the conflict with the existing one.

Evacuating the Squat a week before Alexis’s death is not just an attack on the structures on the ground, but rather an attack on those who are in solidarity with the fight that aims to live in Exarchia and beyond in an aggressive and self-determined way.

We wish the prisoners of the demo on 17th of November and those who got arrested in the squat much strength and love.

Solidary fighting against gentrification & attacks of the state