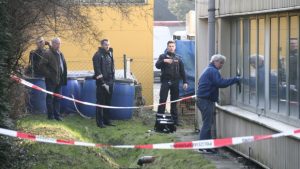 During the night of 17.02 to the 18.02.2018 we targeted Eurocommand GmbH on 92b Gärtner street in Halstenbek 25469, we smashed the windows and threw butyric acid into the rooms.

Since at least the OSCE and the G20 summit, Hamburg police have been building a new deployment software for real-time monitoring. The contract was awarded to Eurocommand and its CommandX software. 696 cops were trained for 368 hours in the use of the system for force management and situation presentation.

The fire brigade and the rescue center were also equipped with CommandX. The integration of vehicle databases with existing dispatch control systems ensures a frighteningly extensive data exchange.
At the headquarters in Alsterdorf, all geodata was converged on a large video wall during the G20 and displayed as a map. The aerial photos from the cop helicopters and videos of cop bodycams and traffic cameras were also available in real time.
Based on this, the coordination of the task forces during the summit days was timely. They were late most of the time anyway.
According to the Senate, the CommandX software proved to be “without defecits”.

It is worth noting that representatives of State Protection, the Federal Police and the military were said to have been seated in front of the screens in the operation center. Whether the Eurocommand-praised and video-equipped drones were also deployed at the G20 meeting has not been proven. At the very least, CommandX is capable of easily incorporating such information.

It’s not just through the marketing of its CommandX monitoring system that Eurocommand has made itself a target. Sascha Pomp is the CEO of Eurocommand. His attitude is clearly relected in his statements about the G20 protesters, which he has since become known for, whom he described as “sick and associal” and as a “pack that deserves no respect or compassion”. Another time he gets upset at his violent fantasies: “It’s easy – put the right rabble and the left terrorists in a room so they can get intimately acquainted, lock the door and wait…” Similar to the AfD (far-right political party Alternative for Germany) he tweeted about successful cleansing operations and dilligently retweeted the cop news during the summit days.

Our attack is an attack against those who want to monitor and control us, and those who provide the skills for it.
Fuck you Eurocommand!