Cars from Bosch and Tyco burned

The burning of security vehicles in Berlin as a useful tool of communication.

By quoting from other responsibility claims, we follow the proposal of relating to each other in order to develop a wider mobilisation of the militant groups in Europe as well as to develope our theoretical base.

We recognized your words about solidarity and we share it, when Rouvikonas wrote about the attack at the Saudi Arabian embassy at Athens 19/12/2017:

“As anarchists we know that the only definitive answer lies on internationalist solidarity between organized, struggling oppressed peoples. We are under no illusions that at this point the still infant solidarity can overturn the plans of the global rulers. Under current circumstances what can be achieved is giving small battles, there where it is possible, in order to sabotage the war process that is under way. [This is necessary in order] to preserve social awareness, [in order] to be capitalized in case avoiding hell becomes inevitable”.

Some people in Rome express our thoughts when they claimed as Santiago Maldonado Cell FAI-IRF the Explosive Attack Against a Carabinieri Police Station in San Giovanni:

“Who wants to watch will continue to watch. Who wants to justify politically not acting will continue not doing so. We are not waiting for any train of hope, we do not wait for better times. Conditions move with the confrontation. The movement is such if it acts, otherwise it stands still. The liberation of the individual from authority and exploitation is carried out by those directly concerned.

Direct destructive action is the logical response to repression. But not solely. Anarchist praxis is also a revival, a proposal that goes beyond solidarity, breaking the spiral of repression-action-repression. Solidarity actions are impotant, but we cannot confine ourselves to the critique, however armed, of some oppressive operation or process.

Hit where they do not expect you. Today we struck in the heart of the militarized capital to challenge the delusions of security. Tomorrow, who knows, maybe in the suburbs where you least expect it. We do not make truces, we chose our own times. This has always been the principle of the metropolitan guerrilla.

With this action we launch an international campaign against the representatives, structures and means of repression. Anybody can contribute to this campaign using whatever tools they consider to be the most appropriate”.

We like to not only talk about the enemy but about us, like some comrades when they attacked the gendarmerie in Meylan/France:

“Because we do not want to remain in the position of victims that society would like to categorize us by recognizing us as women. Victims, because we would not be able to be autonomous, to defend ourselves, to lead our lives as we see fit. We would be weak individuals, too sensitive, subject to hormonal moods, dependent and fragile. We would need strong figures to rescue us, doctors to look after us, children to nurture, cops to protect us.
We prepare our revenge for all the times that we were discouraged by persuading ourselves that we were not capable, that we did not have either the skills, the strength nor the means to defuse the logic that causes us to postpone forever the moment to express our anger and our desires.

We targeted the private cars of the cops, to the indignation of the press, because we wanted to attack the individuals who wear the uniforms rather than their function, their personal property rather than their tools of work. We think that roles exist because there are people to fill them. If behind every uniform there is a human, then that is who we sought to harm.

We are convinced that our limitations are both psychological and social, that in assuming these roles we become our own cops.
By organizing in affinity, and by attacking, we push these limitations”.

Sometimes it is nessesary to define the frame in which we act, so did anarchists in Bar-le-Duc, when they spent a lot of rage and some flames at ENEDIS car park:

“In recent months, several attacks against ENEDIS have been claimed, we wanted to echo them, it made us happy, and ours is a nod to the people who came into play in order to carry them out.

We believe that there is no need to wait to be many to attack, that only a few can also do so, the possibilities are different, but no less pleasing. We welcome the recent attacks on the relay antennas, which open up new prospects for direct action”.

In the morning hours of March 6th we attacked the delusion of security in Berlin. Even in times that we are a few, we can organize ourselves instead of waiting for an opportunity that is given to us by the so called ‘organizers of the movement’ or just to react on another attack by authorities. We can act and choose our moments on our own.

Everyday we are told to remain silent, governed by the state and its institutions that secure the capitalist world. People fill their minds with stupid stuff, head down staring on their smartphones only to look away when an inspector is controlling tickets in the train, when a pig is telling a homeless person to go away where he just found a warm place, when German arms are murdering Kurdish people in Erdogan’s genocidal war. For now we targeted security companies but any other company, upholding the capitalist and authoritarian structures, can be the target. Any night can be a night of attack. 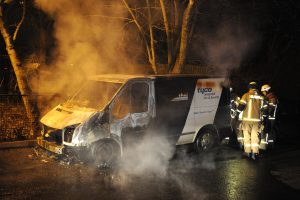 We burned cars from Bosch and Tyco in Berlin-Pankow, Bosch is a well known security company. Its technology is in many surveillance installations, in pig stations, prisons, border fences, CCTV equipment…

Tyco is a company which runs the alarm installations in prisons with so called ‘Business Logic Engines’. They give prison guards the opportunities of the smart city – tracking of prisoners by RFID chips.

We send solidarity and rage to the imprisoned and persecuted anti-fascists and anarchists in Russia.

We heard your voices, you‘re not alone. Though we are not able to physically open the gates of the prisons, anarchist ideas and solidarity overcomes borders, gates and walls and can fill our souls even in times of torture and the hardest repression.

We followed the news about Dinos’s struggle in Greece against the prison administration. With our arsons we support this way of resistance – the anouncement from Korydallos prisoners and the threat from affinity groups outside, to attack every day and destroy the city, is the adequate strategy in this confrontation with the state.

This action is also dedicated to Lisa in the prison of Willich and the prisoners of Hambacher Forst resistance.